Let me start by stating this thread may take years to complete. So will the build.

I got started in back-country driving as a kid. I helped build a van at age 7 (interior and such) for Alberta fall/winter camping. After that there was a '77 Dodge Power Wagon my uncles taught me to wrench on. Started wheeling as a kid with uncles and family fiends at age 7. So I have been wrenching and wheeling damn near my whole life.

A few weeks back my trusty 1991 Volvo 240 Wagon (named Trinity - from the Matrix) had a brake failure. I own I have been putting that car through construction/reno trade use hell the past two years. See I am a professional photography - portrait, commercial photography with 40+ percent of my work dealing with the music industry (mostly punk, rock and metal). Covid hits, all my work dries up, I started doing construction work to pay the bills. Now I also own a 1981 GMC Sierra Grande 2500 Camper Special - but he's off the road slowly being restored and well covid eh, so zero extra money for truck parts. I love my Volvo. She off-roads (fire roads, logging roads, some cut lines, etc) really well for a 2wd car due to the factory ground clearance, the heavy duty factory posi rear end, has a 5 speed that I love, can turn like nothing else (how tight a corner she can make) - no she is not a 4x4, but I get places the guys in decked out Jeeps riding on 37's always are stunned to see me at. I can sleep in her, she carries all my photography gear well, is a blast to drive, and good on gas. Did I mention she is a damn cable work truck hauling everything from lumber to drywall, cement mixers, you name it (back seats are removed). She also has 483,496 KM on her. At the time of the brake problem I have been waiting two and a half months for front brake calipers (did I mention Covid f**ks things up including supply chains?), was waiting on new driver side door internals and in need of a new blower fan.

So I parked her.

Started looking for a daily and as I had always planned on the next project being a 4x4. I started my hunt and settled on a 96 - 05 Jimmy/Blazer. I have driven them before, used them as rental cars when they were in fleets back in the day, and hell, figure my Squarebody GMC could use a little brother or sister.

I looked at TON of crap. I can't believe what people will ask for a 4Runner, a Jeep, a Xterra and yes even a Jimmy/Blazer that:
- doesn't run
- needs a fuel pump, doesn't run
- needs new brake lines and a steering column
- cracked windshield, drivers window doesn't work, and no reverse
- etc

But I did find one

That was it. And a five photos.

Looked at the ad a dozen times over two weeks before I sent a message.

Turns out I know the kid through a good mutual friend. Not a motorhead/car guy. Needed it last year after his car died, bought it off a friend's older brother who bought it from his mom & dad. Had new rear brakes installed in December (last month) including rotors, new 3 mountain snow tires (235/75R15) - no major accidents, a few quirks, always been reliable.

Finally today a week and half later went and test drove and looked at it.

Bit of rust on drivers side rocker panel, some new bubbles on the drivers side rear fender arch - that is it for rust. No skid plates.Aftermarket bluetooth stereo, tires are like brand new, needed new wipers all the way away around - a few bumps and minor dents, front grill is cracked, the hood could use a bit of love. Interior was good. New seats for front row, everything works. Visual inspection by myself and a buddy I trust, looked good. Test drive went well.

So this is the start of the build thread for "Blue". I look forward to sharing my build up, adventures, mistakes, things I learn the hard way and knock on wood, some damn good photos eh.

next up my "build list" while I also address a few quirks and learn about this girl (it is a relationship after all - I take care of her, she takes care of me)

Here are the photos from the ad. 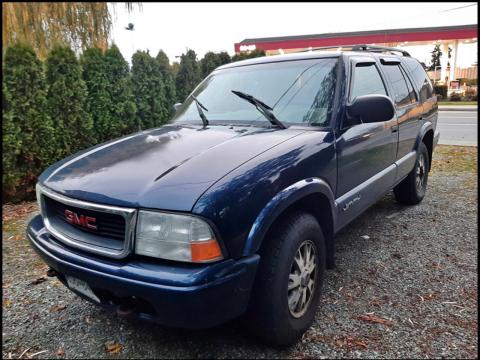 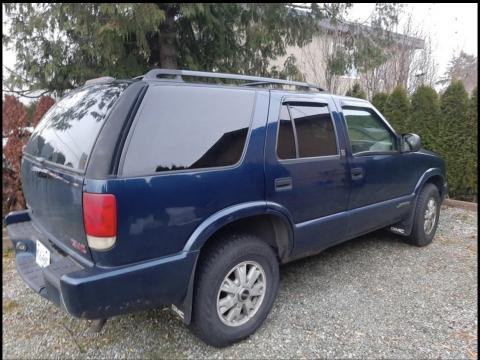 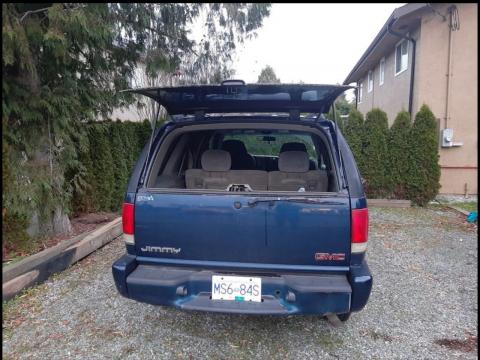 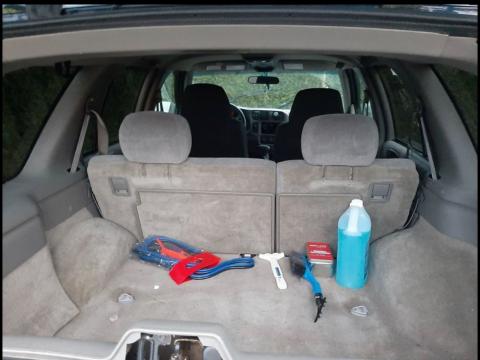 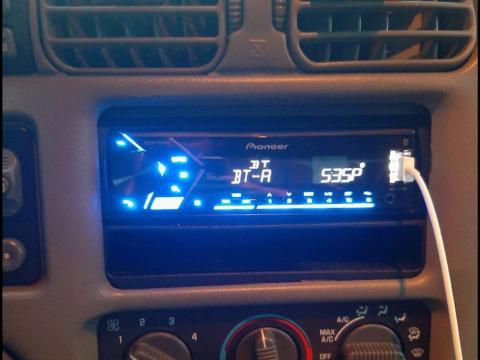 Well it has been just over a week with being Blue's new owner.

- driver sides front window sticks some time going up.
- mirror adjustment knob - works up and down, but not side to side
- steering has the slightest bit of play - assuming that is the idler arm(s).
- parking brake needs to be fixed.
- and yes she eats fuel way quicker than the old Volvo - lol - I knew this going in.

And plus side..
- am happy so far with the Hercules Avalanche X-treme tires that came on her - 235/75R15 - so far they seem pretty good in the wet west coast weather of Vancouver Island.
- the "new" seats are really comfortable
- the Pioneer head works well enough and the after-market speakers in the doors are fine.
- she handles well on the highway and in the city and the little I have played with her on dirt roads seem very good.
- am adjusted to the braking now.
- ride quality is currently nice and stable

Current build ideals.
- 2" PA body lift
- do the aftermarket 1-ton idler arm upgrade as well as replace all front end bits with Proforged or Moog parts (have always had great luck with Moog in the past)
- I'd like to also do the Rough Country 2.5" lift but I would rather use good quality aftermarket shocks like Bilstein shocks instead of the RC ones that come with the kit.
-- I'd also rather do proper rear leaf spring upgrade to be on the safe side (and yeah I know that ain't cheap)
- steel wheels - I can't find what I want with proper backspacing (after market) and am not a fan of wheels sticking out and as the Euro flares seem impossible to get in Canada will go with factory GM steel wheels and powder coat them white.
- once lift is in place going to 30X10.5 - Tire choices include Cooper STT Pro or Mickey Thompson Baja Boss AT or Falken Wildpeak A/T3W A
- roof basket - thinking of going Rhino but I get a killer deal on Yakima so may go with them instead
- install a trailer hitch (looks like she had one once upon a time)
- rear tire carrier. Thinking a hitch mount system or new rear bumper with carrier. Worst case will do the 2-door rear tire carrier swap and follow the advice of the experts who have done an awesome job of detailing it on Blazer Forum.
- rock sliders (looks like these will need to be custom made)
- bull bar with bush guard or a light weight aftermarket bumper (limited options from my research)
- 2 round off road lights to mount on bumper - thinking ARB Intensity Solis Driving lights or KC Hilites G6 20W LED Daylighter
- Rough County 20" Black series 20" Cree LED light bar
- making a set of limb risers that I can remove if need be. So needed where I live
- replace the broken grill
- fix/replace the hood (slight bend on front of passenger side).
- fix/repair/replace rocker panels - may end up cutting them out and just putting custom rock sliders in place as I have seen done on builds
- two rear 12V power outlets at back of truck (one on either side)
- rear locker or g80 swap (still have to look up my VIN and see exactly what I have)

Still haven't decided if I am doing a rear seat delete - but am damn tempted to. Still pondering a rear slide out drawer set up/sleeping platform.

Hoping to take it out for it's maiden camping trip the week of Feb 17 until 21 up to Port Renfrew BC. Logging roads will be about the worst she will see.

A few pics I grabbed this past week of her. 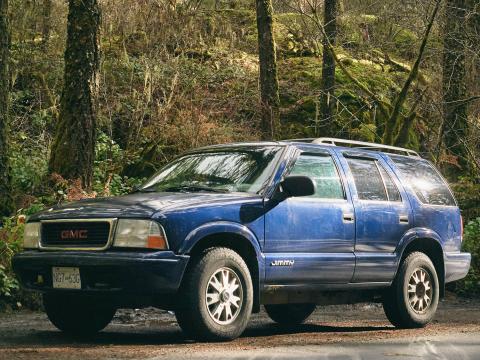 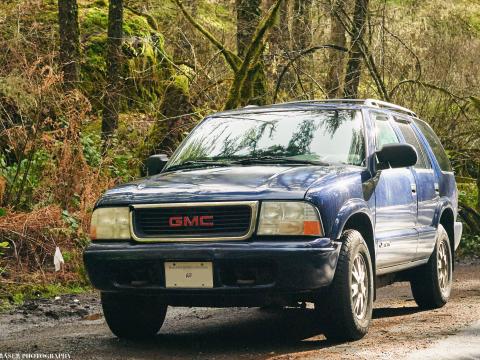 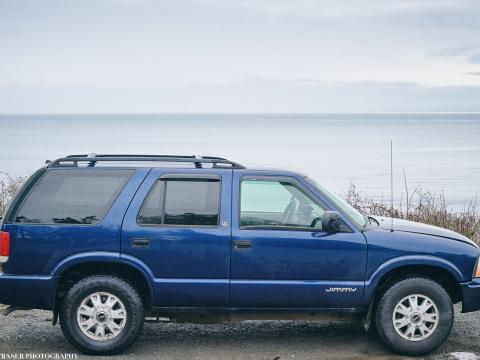