So You Have Gotten Your Truck Stuck...

Home » Forums » Vancouver Island Off Road » General Chatter » So You Have Gotten Your Truck Stuck...
3 posts / 0 new
Log in or register to post comments
Last post

This past long weekend, July 30 to August 1 I took some friends of mine up to a back country lake (technically a reservoir) for a night of star gazing, an overnight camp out, a campfire with dinner and just to basically show some friends this amazing back country location.

The road up is not what one would call car friendly but I admit I have managed to get my old Volvo wagon up there in years gone by. For this trip I took my 2002 GMC and my friend brought along his 2019 fullsize Ram Hemi 4x4 (four door model). We all had a great time and as we were just about to leave out of the bush comes this younger man, I'd say mid to late 20's. He had been walking for over an hour in the hopes of finding someone who could help him and his friends get their Landcruiser unstuck.

Knowing the area and knowing my skills as well as knowing my friend and his truck had never been up where they were stuck I wanted to say "Sorry we can't help but we can give you a lift to cell services/back to Victoria". Jason (owner of the Ram) said we can't leave them there which I totally understand and said to me, "isn't you who always says we have to try ad help others?". I nodded and said fine, lets go. I asked Jason did the kid have photos on his phone of how bad it was or where the LC was stuck? He replied no. I sighed.

Jason and I both had friends riding along with us, and my little Jimmy was pretty much packed tight, but Jason had room in his truck for the kid. So Jason moved a few things around inside and from the back seat to the bed, loaded up the kid and off we went to attempt a rescue.

Now, I had a good idea where where they had gotten stuck - it was one of two places and both locations I didn't believe we would be much help as neither one of us had a winch on our trucks - Jason's Ram didn't even have tow hooks. I had a full size shovel, a tire air compressor, and tow straps with me, but that was it as far as serious recovery gear. I'm riding on roughly 29.5" tires with an aggressive winter tread, Jason is riding on all season highway tires. This Jimmy is new to me this year and I haven't had the funds to put into what I want a.k.a. bumpers, winch, etc.

As it was after a rough forty minutes down a very narrow mountain road where my truck got well pinstriped and Jason's rig took a beating we turned down to the exposed lake bed. Damn was the first though through my head - they (the younger guys) had gotten themselves stuck in what equates to almost quicksand while driving around on the exposed lake bed.

I totally understand why one would drive on it - it's fun, it's sandy, it's exciting - the perfect place for an ATV, side by side or maybe even a dirt bike - NOT a great place for something as heavy as the Landcrusier or a full size modern pick-up. Heck my Jimmy which is not a heavy rig is not a good toy to place with in this location. Jason and his passengers headed off around the bend to go help nd I followed until I felt myself sinking at which point, I turned around and found a safe place to park while I explained to my friend riding with me that I didn't want to get stuck. All I could think about was I hope they don't get the Ram stuck as well.

So myself and friend started walking and after about fifteen minutes Jason's friend comes walking around a bend and says, "they're stuck", I replied I know and she said, "No Jason is stuck as well and needs you to grab your truck". I said I wanna see what I am getting into before I risk a third stuck truck. Worst case I can unload a bunch of my stuff and put people in and drive us all into Victoria and we can come back for the stuck trucks and my stuff later. So I followed her to where I found them.

Jason was attempting to turn around so they could hook up tow straps to the back of his Ram when his front end sunk and he had gotten stuck. The kids were in the process of trying to dig him out by hand and place wood under his front wheels as well has rear wheels.

It didn't look good. Looking at the stuck Landcruiser it looked like they had attempted a small water crossing and had hit what is basically quicksand - front end of the truck was buried and wasn't going anywhere. Everyone of course is asking me to go get my truck and pull them out. I'm looking at the land, soil, doing stick tests to see how soft everything is and still not sure I am willing to risk a third truck to this mess.

I won't get into blame or suggesting what the kids did wrong or place blame on anyone. At the end of the day I was able to get the Ram unstuck after a few hours and we gave the kids a ride back to civilization and eight hours later with the help of members from the Vancouver Island 4 Wheel Rescue group (six trucks) they did get unstuck.

My fiends Ram which is his work truck and in this case means it needs to look good required $500.00 in detailing and it's into the dealer this week to check out the suspension. My truck took a whack of new scratches which are fine by me as that is why I own the rig.

My thing is this: We all have phones that have cameras. If you are stuck and walking out in search of help, PLEASE take photos of the situation. It allows the rest of us to make an informed choice as to what type of help we offer as well as allowing us to decide if we want to risk damage to our own trucks. Jason was upset with the state of his truck and I can't blame him, but as I did mention, "I did say I didn't think we could help at the start of the rescue attempt and that your truck was going to take a beating". He and I agree we did the right thing trying to help but it would have been quicker (and smarter) to look at a picture on a phone and go "No, that we cannot help with, but we can give you a lift and/or notify those who can".

I know our sport has grown a lot in the past few years. People watch videos online of people out playing and wheeling and think it's a great sport to get into it - it is. But for most of use forty over older, we learned from our family, friends of our parents, uncles, aunts, etc the basics - how not to get stuck, why you always bring a shovel along, etc. And as more new comers get into wheeling I am seeing more and more "help I am stuck here and can't get out" requests as people push past what their skills & rig/equipment are capable of.

So for the sanity of all involved can we start teaching people to "take photos" when asking for help - the stuck truck, the road into where it is stuck, any technical/tricky spots along the way - the more is merrier if you ask me.

Heck is there a formal FAQ or list of things to do when someone gets stuck that I can share? Do we create one if there isn't?

Thanks for reading. Feedback is welcome.

And for what is worth, Jason and I have a story, some great photos (I'm a professional photographer and had my Nikon on hand) and an adventure to look back upon. 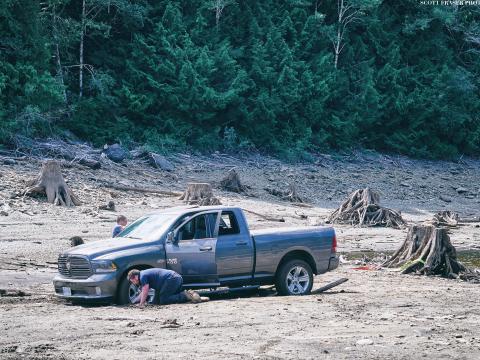 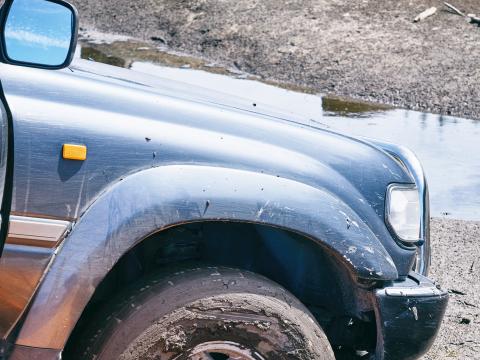 Everyone in the backcountry should have a winch imo, or if you can't afford one, a come-along and tow straps at the bare minimum. Even more so when wheeling solo.

For anyone new to wheeling reading this, there is a good thread from years back with some great suggestions for the best gear to bring wheeling. It's worth the time to figure out your gear now, before you find yourself stuck in the bush needing it.

Anyway glad you were able to get the trucks extracted. I would look into expanding your recovery gear all around, even if only for helping others stuck in the bush.

Winch wise been looking at the Bush Winch (https://www.bushwinch.com/) but either way, want a new set of Max tracks and a few other goodies. I'm pretty conservative in where I will take my rig and learned a long long time ago to walk it and pick a line and when in doubt say Nope.

Thanks for the link on the thread.