One thing to remember is “ply ratings” don’t actually refer to the number of plies in the tire. It’s just an indication of load capacity and truly one of the most nonsense rating systems we still use for whatever reason.

I run 6-ply ”C”-rated k02s tires for a compromise. They are a little softer on the highway than 10 ply, and not as heavy so they save your fuel economy a bit as well. You can get k02s and Duratracs and several other AT tires in 6-ply depending on the specific size.

My only comment on k02 is have low expectations of them in winter even with the “snowflake” rating. In my experience they perform very poorly in snow compared to the all-season wranglers that came stock on my truck. They look great, and work well off-road, but a good tire for winter they are not, at least in my experience.

3 years 6 months ago in Tires ratings are stupid.

Timberwest, through its real-estate sub-company “Couverdon” is busy selling off the working forest to make executive subdivisions. Of course there is no problem getting permits and rezoning because Timberwest is owned by the Provincial Government and Federal government pension plans, both of which use company profits to fund their various bloated and unrealistic pay-outs to civil servants. Ever wonder why government pensions can afford to be so rich?........look no further than what’s happening on Vancouver Island: Get-rich-quick schemes like shipping undersized raw logs to China, and converting the forests into subdivisions.....all courtesy of your own government....operating on their “private forest lands”.

Quite literally, “the wolf is guarding the henhouse” on Vancouver Island, and it’s a corrupt system. But hey, it’s British Columbia, which by default means crooked politics, so I guess nothing is new.

I hope someday the dirty, irrational, and illegal deals that put so much of the island in “private hands” are recinded, and the books of these operations are opened for public scrutiny. Unfortunately that is unlikely to occur as long as the primary stakeholder in these companies is the government itself:

3 years 7 months ago in west coast road for sale ?

The easily accesible areas on the South Island are private forest lands and mostly gated. The terrain you seek does not sound much like the geography of the South Island to me, so maybe change your scope to fit the geography, or head to the North Island. Filming on the mainland sounds like it might be a better bet for the car commercial or whatever it is you seek to film.

3 years 7 months ago in Need some Help!

If I wasn’t working that weekend, I’d be there. Rotten luck for me.

That’s a cool vehicle! Perfect for a lot of island wheeling, being small, with not a lot of overhang. What size tires are on that? It’s hard to tell from the pics. Next time I’m going out, I’ll drop you a note.

3 years 11 months ago in Hey there! New member with weird truck 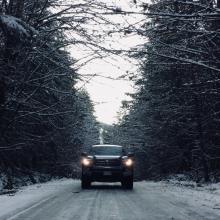