If anyone on the south island is genuinely interested in custom or DIY LED lighting for their rig at a good price, listen up!

Since about November I've been trying out some different things I found on one of those "totally legit" "China Direct" websites.
If you're sharp, you can sometimes find what seems like criminally good deals on various products or parts, you just have to wait a while for it to ship from China, like 4-6 weeks. I mostly use it for the more obscure or specialized items you don't usually find on that "A Maze On" site. ;-)

Anyway, I found several different listings for various waterproof 12v COB LED's, all different kinds at varying prices, and after much consideration, I decided to order a few things that I thought looked promising for doing a more affordable custom DIY DRL/off road lighting project on my rig. Well, what I've ended up with so far are some pretty slick augmented reverse lights and a really cool low profile grille chromie light bar/DRL combo out of it for the price of a meal and a beer at Brown's.
I even threw in a variable steady rate turn signal relay with my order, which was the last part I needed to complete my 1157-A incandescent to LED conversion so my signals would stay flashing at a normal rate that I now control. I'm actually pretty stoked right now since these projects I've been putting off over winter are now starting to come together nicely so really I want to grab a few more goodies for the next ones ASAP.

Time is running short to get another order in before Chinese New Year, which makes ordering anything from China around that time a total gong show if you can excuse the pun. If nobody is really interested in them, I will only order a few more for me but they get a bit cheaper by the dozen if people want to do a larger buy in.
I don't need any monetary commitment up front, I'd just like to know how many people would be seriously interested in getting them and how many so I know what would be a realistic number to order. Considering the price of light bars, that aren't even legal to run on the road, tend to start at a hundred bucks and go up from there, these could allow you to easily make something for a lot cheaper and still get a more custom look and practical use benefit out of it for your rig.

I have all the technical spec's for these things which I will post below for anyone techy who needs to know everything about them and what they can/can't do.
I will also cover application spec's and do's and don'ts for the DIY'ers.

The LED bars will cost you $5 each and will take 5-6 weeks to arrive once I order them, presuming they ship by Chinese New Year. Post here sooner than later if interested, because I will probably be putting an order in by the 29th at the latest or they will be further delayed than usual. I do have some left from this order right now but most are already earmarked for friends and people I owe thanks or favors to. I just ordered everything else I don't already have yet for hardware to do a full install on a dual mode system five times over. Depending how you want to run them, the hardware needed to install them (properly and safely) as dual mode regulated DRL's is under $50 total if you keep it to 5 LED bars or less running off one regulator. $30 if you run them unregulated. Keep in mind, these LED bars are not self regulating (chip controlled) so they can only be used safely off road, as they would shine too brightly for regular road use and would likely get you a lot of angry highbeam flashing and possible MVI's, no kidding. Each little module is only 16cm long and 1cm wide but has 76 individual emitters on it that can dish out up to 3000 lumen at 15W at a 150º angle at full power.

These aren't little sissy lights. Pictures never show how bright they actually look IRL but I'll post some photos anyway to show what they look like.
I have never seen anything that performs like these do for twice the price so I'm taking full advantage of it while the deal lasts, why not eh?! ;-) 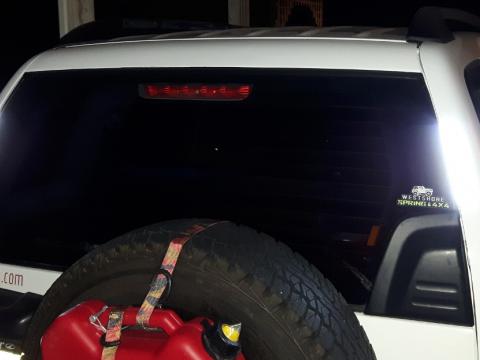 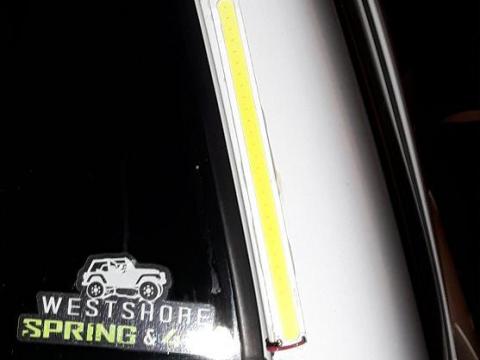 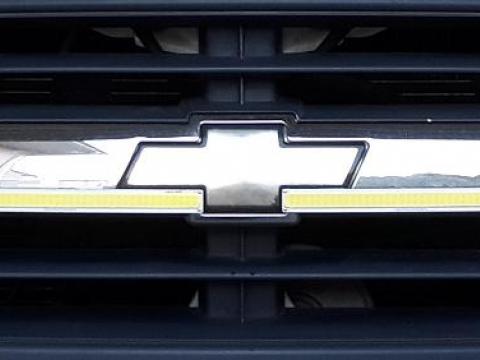 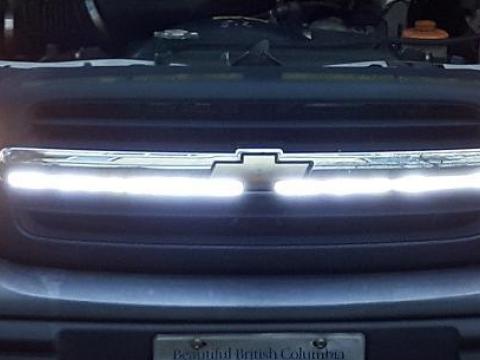 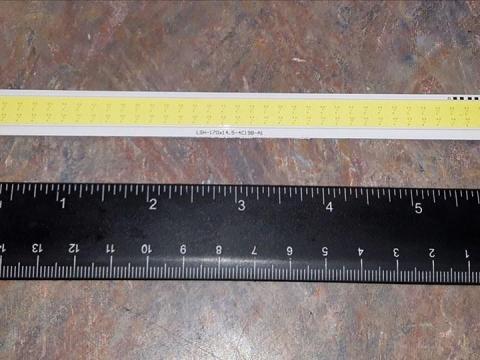 The ones shown in the photos are actually the cheapest of the two types I ordered. I wasn't 100% happy with them because some of the segments on the bars don't light up quite evenly with each other. The new ones I got cost more per module but light up more evenly so I'm going to change mine out soon for the better ones and repurpose the cheaper ones as under the hood lighting or something else where a little variation in brightness isn't going to matter.

Here is how well only running lamps light up the surrounding area vs how 4 of those cheaper LED bars going across my grille chromie lights up the area vs running them in DRL mode so they don't blind people on the road but still increase your visibility to others.

Note that ONLY the LED bars are lit in the second photo, my headlamps were completely OFF. 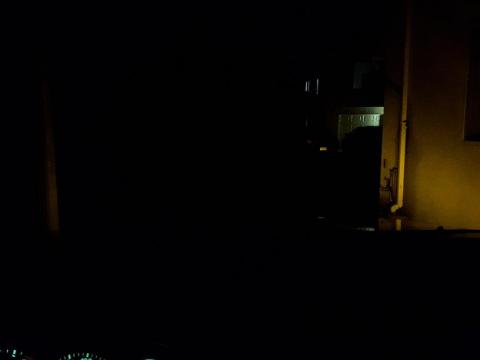 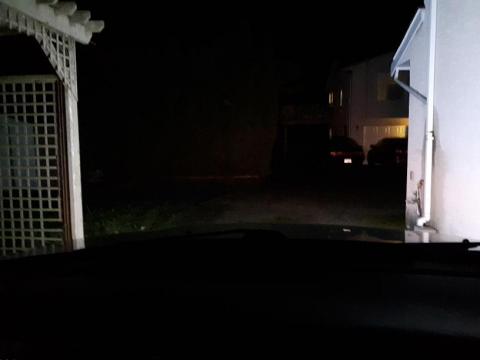 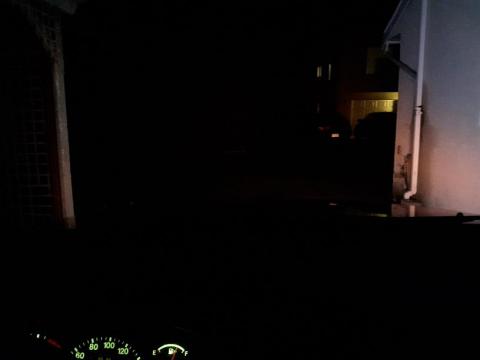 Here are the technical specifications for the COB LED modules.

Other features:
Pass-through power rail activated by shorting the test-point contacts which allows up to 4 modules to be strung together from one power lead.
Modules are flexible enough to be shaped and conformally surface mounted to slightly curved surfaces like body panels and bumpers.
Modules mounted to a sufficient heat sink (large metal surface) can run at peak power continuously without additional cooling or duty cycling.

There are a few different ways you can set these lights up to run.

1. "Mad Max Mode".
- Direct unregulated power to the LED modules, activated by an on/off switch in the cab with a fuse inline for proper electrical safety.
Pro's: Cheapest set-up, requires less circuit design and less hardware to complete. Maximum brightness possible without additional hardware.
Con's: Only for off road use. Too bright for on road use without a current limiting voltage regulator. Brightness will vary with the voltage coming in from your battery or alternator which goes from 12.6v when the engine is off, up to 14.8v when the alternator is at full output.

2. "DRL Mode"
A preset non-variable current limiting voltage regulator is installed inline with the power supply to the LED modules in order to regulate and limit the output for safe on road use. Wired to your vehicle's DRL or manual running lamp circuit to turn on and off automatically with your DRL's or manual running lights.
Pro's: Safe for on road use. Still helps a bit off road by casting some light closer to the vehicle where visibility from headlamps is limited. Costs about the same to set up as Mad Max but a regulator will cost about $5 more than a good switch.
Con's: Takes away your control of the lights and nerfs brightness for off road use where more light intensity and coverage is desired.

3. "Dual Mode"
A 3-position switch installed in the cab controls the LED mode, allowing you to have unregulated power for off road use, regulated power for DRL use with either automatic or manual activation and also to turn off LED's completely if desired.
Pro's: the most versatile set up that will give you the most control over your LED lighting.
Con's: The most expensive in terms of hardware cost and labor intensive in terms of design and installation effort required.

To wire these modules in as augmented revers lighting, it is not really necessary to use any voltage regulation. I just used a 5W diode and an audio filter capacitor and ran them right off the existing reverse lamp circuit and they're doing just fine since they are only lit while reversing and the tint on my rear window really requires a bright light back there to really see anything well through it.

I should also note that if you prefer a warm white color temperature from 3500K-4000K, they also offer this product in that option but the price per module is double what the pure white LED's run for ($10/ea). They more closely resembles incandescent light and show off the red end of the color spectrum better than the cool or pure white color temperature LED's and would probably suffer less scattering effect in foggy conditions. I got a set for myself to try out but at that price it's not quite as cost effective to deck the whole rig out with them and I personally prefer the pure white LED light over the attempt at faux incandescent light by an LED. You also suffer some brightness loss with the warm white modules, as they are only rated for 10W max and put out 1200Lm.

They also ship with thin aluminum covers that hide the PCB part of the module if you prefer that look but I find them to be too flimsy for the type of abuse they'd likely get subjected to off road and I elected to run them naked on my test run to see how well they would hold up and so far there's no sign of any damage or degradation.

These look like they would work pretty well for underbody/rock lights attached to the frame or fenders.

Yep, they sure would. They're very thin with a low enough profile to tuck up just about anywhere.
You'd have to mount them somewhere they aren't going to get trashed on the trail though.