I just noticed this news article on CTV news that was posted at 10:47 am. It is at:

"A 44-year-old Oak Bay man who set off in his Jeep Monday morning and didn't return home has been reported missing.

Mark Lovett was last seen in Oak Bay around 7:45 a.m. Monday and police say it's uncharacteristic for him to have not returned home.

Police initially said they believed he may have driven to the Shawnigan Lake area to go off-roading in his Jeep, but new information suggests he may have been in the area of Valentine Road and East Sooke Road around 1 p.m. on Monday.

Oak Bay police said they have called in Sooke RCMP and Shawnigan Lake RCMP to assist in the investigation.

“This is apparently completely out of character for Mr. Lovett so we are very concerned," Oak Bay Deputy Chief Ray Bernoties said in a news release. “The general area where he is believed to have gone is quite vast and remote and we do not believe he was equipped for overnighting in these cold conditions.”

Lovett is described as 5'9" with a medium build, short hair and blue eyes and is believed to be wearing camouflage pants and a black jacket.

Anyone who sees Lovett or his Jeep is asked to call local police."

I thought I would post in case anyone knows him or is in the area.

I hope he is found ok!

Hi, This is my brother, I'm in the UK but my other brother is in Victoria now. Is there any twitter or facebook clubs where we can post this as we are getting worried Any help would be greatly appreciated. Thank you.

If you could post this on as many social media forums that would be a great help.

Ok, so his girlfriend just rang and said he has checked in, sorry for the drama.

Great news. I am glad he is well.

great news....I was ready to go out this evening to help with search efforts.

Thank you for keeping an eye out. Just went out for a little play and managed to get stuck in snow. My jeeps still there and am hoping someone could assist me getting it back.
Much Thanks and sorry for the drama, Mark.

Glad your ok Mark. I just happened to read the news this morning and checked the forums here but didn't see anything. I though I had better post something to alert the wheelers close to you. I am glad your ok and everything worked out.

Glad you got out ok - I just got stuck in the snow yesterday as well and it took quite a bit of shoveling and pulling to get out. I could see that being difficult or impossible if solo without gear.

Where abouts is your jeep stuck?

Its in Jordan river. Trying to sort something out to retrieve it. Thanks. Mark.

if you want help we could go today why not post your phone number so that people who can help have a way of contacting you. can you post photos of what it looks like stuck the conditions etc.

My phone number is 250 893 0503. I'm painfully sore and back at work today. I don't want to release exact location online in case someone pilfers stuff. It's about 20 km in .

I got stuck in snow about 10 years ago up near Wye Lake. Walked about 10 km down the mountain to Diversion Dam. There were people fishing in the river below the dam but unfortunately they were parked on the side of the dam opposite where I was.Yelled down to them my situation and that it was now about 4 pm and would be getting dark soon. Being awesome people they drove down fore bay main to Jordan river then back up Jordan main to pick me up then drive me back to Langford.I am forever grateful to those people who ever they are...friends Drove back up to my Cherokee the next day made repairs then drove it out. It was an odd breakdown. got high centered on some snow at the crest of a hill.Didn't have a shovel. Instead used a snowshoe as a shovel and spent a very long time clearing the snow around the jeep.Still couldn't get out. Revved the shit out of the engine trying to rock back and forth and ended up blowing a frost plug right out of the block. End of game right there. Brought up and expandable frost plug the next day and some water and used buddies truck to pull out.

This evening three kind people offered to try a recovery trip. I'd like to thank Darren, Kevin and Brian for their effort. Unfortunately it was snowing pretty hard and where only able to make it about half way. That said it was a fun and pretty attempt. But back to the drawing board.

UPDATE: Jeep is still stuck but hopefully not for long. Had a great response from a club I haven't heard of until recently- 642 Jeeps-who have tried and are still trying to help retrieve my jeep.
They are setting up a trip tommorow with atv's snowmobiles and 4x4's to try and get her.
If anyone here has a capable vehicle to assist please let me know and I will inform you of the details when they are all confirmed. but it will be early tommorow and sounds like it will be a lot of fun too. If you would just like to enjoy the show that is fine too
Thanks, Mark.. 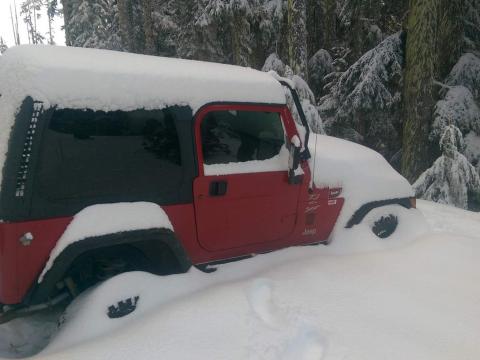 Thanks for the updates Mark,
It's a long trip for me and it sounds like you're in capable hands, good luck.

Thanks, Unfortunately it was called off today due to severe weather. Might not get it back until spring at this rate !!!! Only myself to blame, humble pie being eaten.....

It is a lesson you will re-live for years to come. Yours will not be the first vehicle to be left up there until the thaw in June. A human trait is curiosity to go around just one more corner...and when you get to the next corner you can wait to see what is around the next and so on.

Friday Feb 23 hibernating for the winter 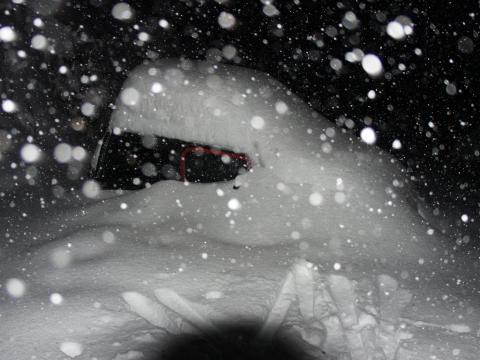 Ahhhh that sucks hah - did you ski in to take that picture? I wonder if it might be worth bringing some of those rv dehumidifiers up there to stick in the cab so it doesn't start growing fur once the melt starts.

some people on my Facebook page ( Kludahk Trail) sent me the picture on a ski trip up to the trail on Friday night. I asked the page members to keep an eye on it and to report any suspicious activity and also to post pics of anyone messing with it. A lots of people pass by that area often on trips up to the Kludahk trail

The kludahk trail area gets some serious snow. It sucks that you're jeep is probably stuck until it melts but at least you're safe!

Well its been almost three months of updates from various kind people. It looks like it finally would not be a wasted trip.
I am seeking some help from capable rigs and people to retrieve my jeep.
If anyone is willing to help I would like to try this weekend.
Much thanks, Mark.