I went up Mount Bolduc in the fall and finally found the crash site of a WW2 Lockheed Ventura. I didn't find any other threads about this on the forum, so I thought I'd post some photos in case anyone else is interested. The forest service road (Mount Bolduc FSR) is accessed off Gordon Mainline about 15 km from Lake Cowichan (where the road turns to dirt just past Gordon Bay Campsite), there's a road heading over to Harris Main (Pacific Marine Highway) and the turn off for the FSR is about 2 km along that road. You head up the FSR (ignoring the sign saying not to) and go up about 5-6 km, there's bits where the road is steep and rocky but all pretty easy going. Not exactly off road and I did it in my Cherokee Sport, so obviously not hugely challenging for anyone in anything more than a sedan. The crash site itself is a bit hard to find, there's no signs on the road. The maps for similar trips are kind of confusing but once you find it, you'll wonder how you missed it (if you're like me and you missed it three times before) The site's a war grave. Don't take any souvenirs. Photos below. I'll post a map too eventually. 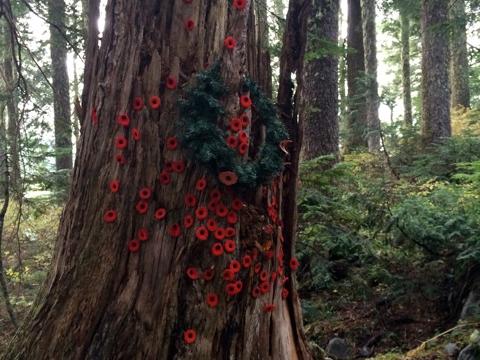 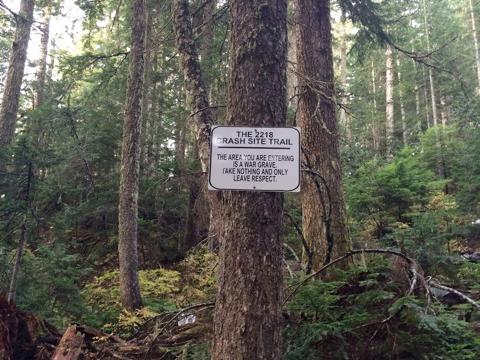 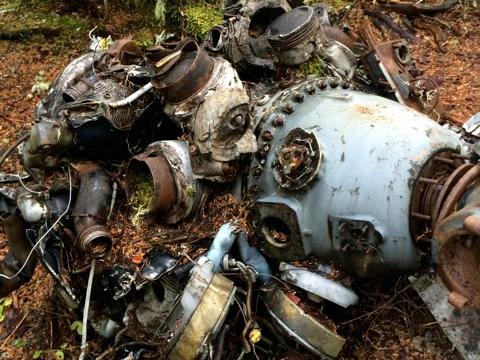 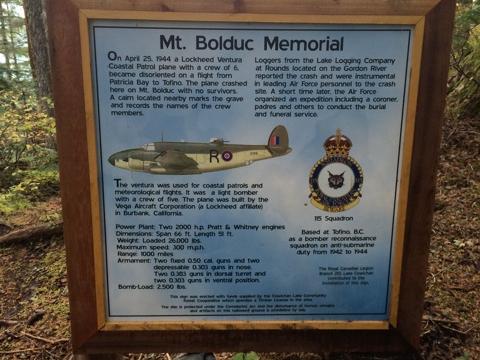 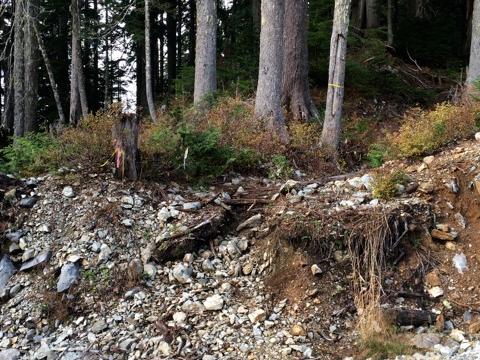 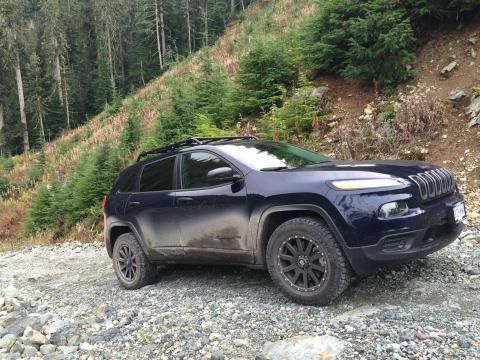 wow thats so sick dude, thanks for posting this! have been looking into checking out plane crashes, i know theres a few, and theres a really intact one way up island! thanks :)

We're going to head out camping in the area this weekend. This crash site has been on my list, so I'll copy your directions and see if we can locate it.

Go way further than you think. There's two hairpin turns and the second hair pin has a steep up grade and then there's a kind of gully on the left side of the road and up the side of that a stump and some small trees with ribbons and a narrow path right beside. That's it. Its another 500m or so to the end of the road so if you miss it just go to the end and work your way back. Tight turn around with steep drop offs at the end.

Took me a few tries. I didn't go far enough the first time because I was looking at other people's crappy maps and I thought the first hairpin turn was the only one so I stopped and looked around and failed. Had to go back because the kids were whining. Second time I went too high and stumbled around through the woods in pouring rain. Third times the charm. Hope you find it faster than I did. Never found the wings which are higher up the mountain, about 1/2 km further.

im actually probably heading there this weekend too, we are doing a 3 day camp trip, thanks for the info joe! 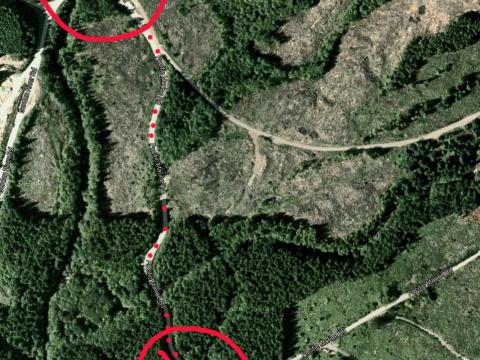 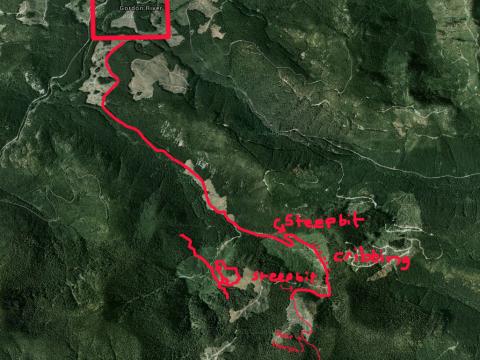 This is the crash site of my grandfathers borther, harry Arthur maki he was only 18 when the plane went down. . So amazing what you can find. Before my grandfather past away he had a chance to visit this site with his wife and daughter.

Langford to Honeymoon Bay is about 1 hour.
20 minutes to the turn off from Gordon Main
1/2 hour - 45 minutes for the climb up Mount Bolduc forest service road, depending on how fast you like to go.

has anyone been up to the memorial site? Is it identified well. Planning to go up next weekend.

It’s not identified well at all, ribbons tied to a few trees at the path in to the site. No signs until you’re surrounded by airplane bits. But there is a big sign explaining what happened and another identifying it as a war grave, lots of poppies on a tree stump, you can’t miss it when you’re in it, finding it from the road is not so easy. Keep your eyes open for the ribbons and tape on the trees marking the path, go way up because it’s further up the back of the mountain then you’d think. Cruising altitude for a Lockheed Ventura I think

After the last (somewhat rough and rocky) switchback you take a hard left up a very steep road. If you stay straight it takes you to the wrong place. After the steep left you follow the road until it turns into blast rock and right after that the road opens up in a big O. Park here and the trail is on your left. It's marked with an aluminum cut out of a plane about 20 ft up on a tree and there is flagging tape.

Have you been to the crash in port renfrew? I have pretty rough directions and I'd like to go find it one of these weekends

hummm theirs a PBY-5A Canso out that way it all but gone i know i have been to more but access out shawnigan to renfew is so messed up i stay out of the place ....

The one I'm thinking of is kinda near twin lakes and I've heard that it's in great shape and no graffiti. I just asked a friend in renny for more info on it

Thanks for sharing, I'm definitely going to check out Mount Bolduc. My maps say it's on private leased land, no ones had issues up there?

Nobody will hassle you. The only thing you need to worry about is snow but it's been a pretty mild winter.

Thank you for the excellent directions. It enabled me to take my son to have a memorable trip and to pay tribute to the crew who lost their lives. He (and I) will never forget it. 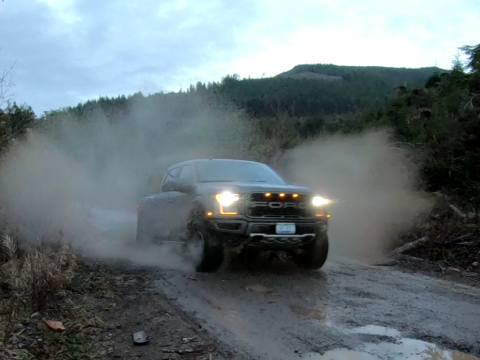 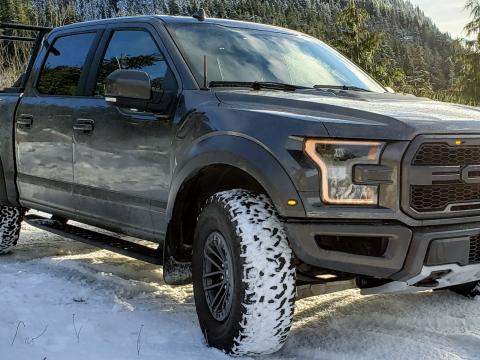 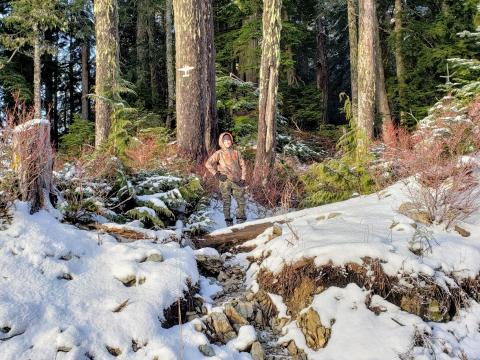