Has anybody run the Backroad Maps Garmin GPS maps?

I noticed that Garmin has now disco'd their TOPO Canada series after not even updating it one time for registered users since it's original release in 2001 despite being quite expensive and riddled with issues when using it for actual navigation.
I also just noticed that Backroad Maps published their own licensed Garmin 32k TOPO maps in June 2016 and GPS Central has them for sale on DVDR and uSD.
I am currently running TOPO Canada on my vehicle mounted 60CS unit along with Metroguide Canada but unfortunately I lost my loading software and everything else with it when my old machine crashed and I can't re-install it with my hacked version of Mapsource. If I try to transfer or install anything now with vanilla I'll be screwed without CD keys and unlock codes and will be limited to one device recipient for each mapset unlock code I purchase, blah blah blah. That's a whole lot of dough wasted on outdated maps that have pissed me off on the road and in the bush so many times I can't even count so I'd rather just buy a new, better, up to date map set that I can use on or off road with less stress and WTF moments. Anyways, being a spendthrift by nature, I like to research my purchases a bit once they get in to the 3-4+ digit range and I thought I should ask here on the chance that someone has actually used this product on the newer Garmin units that support the higher resolution maps.
Right now I just load a bunch of orthophotos with a UTM grid on to the memory card and use the photo viewer to approximate my location on the image. It's a bit sad and it's a time consuming process that has to be planned and carried out in advance of any trip out because it quickly fills up with image data so you can't exactly just dump all of VI in there, now would you have any hope of actually using it with that many tile sets to sort through. :-P

Anyways, here's a link to it from GPS Central
http://www.gpscentral.ca/accessories/backroad-gps-maps-alberta-bc.html

Let me know if you have used the GPS Backroad Maps and what you thought of it...

I have backroad maps newest update and frankly the free maps you can get off the net are just as good ....Back road maps kind of sucks for Cowichan Valley ...............

I have heard that BRM sucks a bit on the island, sorta like we were an afterthought LOL! ;-)
I have the BRM Okanagan edition and it's been great for the areas I've been exploring with it.
Someone had ported a bunch of high end topo maps to a Garmin compatible format a while back and posted them online but I was never able to figure out how to load them as they weren't licensed and are not recognized by the loading software as a valid mapset so I must have missed something in the process of getting them on your device. All I know is I can no longer stand the crappy TOPO Canada, it's constantly trying to send me down non-existent roads and routing me 40km off course to go around errors in the continuity of existing roads. TOPO doesn't even have the Veterans Memorial Highway or the Nanaimo bypass in it FCS! It's next to useless now for road nav and equally frustrating in the bush when you realize that surveyed road on your map from 1979 doesn't actually exist.

brm is a shit service. only their map books are good.

i use back country navigator pro. well worth the 12$

The BRMB app is crap offline as well, works great when on wifi to look up camp spots. But offline (downloaded maps) are terrible. To get all of the island in one map is over 13gb! Just the South Island at medium zoom is 5gb.. then once there downloaded they don't load properly, making the map you have even more useless.

Does Back county navigator have most of island logging roads in it?
.

kingg5
Does BCN Pro allow you to download the mapsets to use out of cell range?
I downloaded the free version to see if it was any good but it's hard to really try it out in the bush unless you're on the sunny side of a mountain near civilization.
The maps are definitely a better quality than the free Canada Maps app. Too rudimentary and lo-res and missing so many roads and other useful landmarks.
I really need a good offroad mapset for my Garmin GPS units though since I know them so well and use them to navigate offroad. I used to plot the route out in advance and then load it in and use TOPO just for the terrain contours and so the tracks are easier to make sense of at a glance on the map.

^^^ this is the good shit right here. think someone posted it on this forum. totally worth the 14 bucks or whatever. super easy that it lets you switch between different map providers, and the backroads mapbook, is basically the equivalent of the CanMatrix layer in this one. offline satellite imagery from the ESRI layer is what got me through many unmaked roads.

yes they do. they are phenomenal and dont take up much space at all. ive been using it for a couple years now and its the best one ive found. 100% works offline. i use that with offline maps from google and its the best of both worlds,

Garmin Basecamp (Free) - www.garmin.com/en-CA/shop/do…
British Columbia BRMB on Mini SD ($50-$80) - Cabelas or Amazon
Garmin GPS receiver of choice.... I use a GPSMAP64 right now because of its portability outside of the vehicle, just a thought.

Ive been using this method of GPS nav now for a few years and I have nothing bad to say about it really. The BRMB sd card I bought about a year ago, and I have full confidence in it. It shows 98% of FSR roads and has great TOPO data, POI's and all water systems you might find along the way. You can sync your tracks onto your computer later or in route if your fancy enough to equip the cab of your truck with a laptop. I have version 6.0 of the BRMB for BC and its pretty damn accurate. FULL DISCLAIMER I have not tested it much on the south end of the Island so I cant swear by its accuracy down there, but if your looking for "TRAILS" they probably wont be on any maps anyway. People here were having issues with the size of the file and I dont know why, all the info I have put in plus the original data is just over 2gb so it will easily fit on a cheap mini SD, pic below shows the excellent TOPO detail, also you might find it handy to run a copy in your computer at all times. I have the original SD in my GPS and the copy in my computer. That way BaseCamp will always have the BRMB data. Did I mention it matches the book perfectly? Anyways, Im really not seeing the problems others are having, and since you have a Garmin GPS already I highly recommend it.

Alternatively if you're not a Garmin fan you can use a tablet or phone with Hema Explorer app (Multiple Layer Platform) and an external GPS receiver, like a GarminGLO if you don't trust your hardware's internal one.

My screenshot for example. Green being driven and red untraveled. 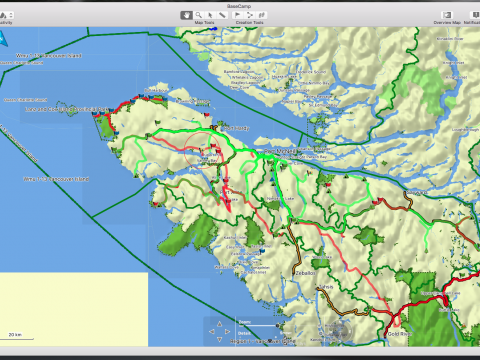 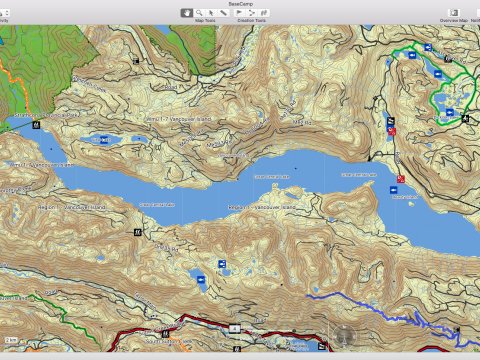 I have also been using BCN for a couple years now. It works great for the cost. I run it on a tablet mounted in front of my rear view mirror.
I have it mounted in the same place in the XJ 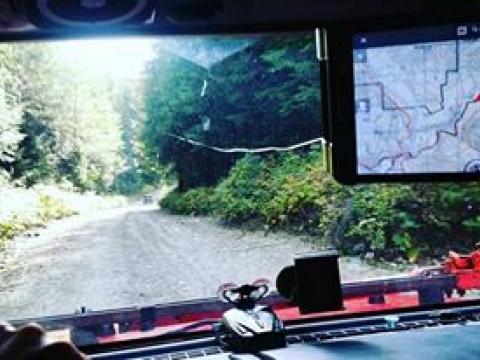